Yesterday I took the chance whilst H was at nursery for Baby J to have some mummy and me time. As a real treat (not) I took him for a day of shopping! I also decided to collect my VO5 products for a recent Collective Bias™ Social Fabric® Community I am undertaking.

I was asked to visit a local Boots store and purchase some VO5 haircare products, which after a  disastorous hairstyling by my butcher of a hairdresser, I was in desperate need of! I had decided to go blonde a couple of weeks ago as well as have some layers put – the flippin woman hacked huge chunks off and didn’t even do the blonde even! Anyway, my hair needed some TLC!

I head to my local Boots in Warrington, it had recently been rebuilt after a fire so I was intrigued to see what it would be like. Of course, they had done a great job – the store was large, well laid out with plenty of rooms in the aisles. The only missing was a ceiling – they had left it open to the roof space, but I wasn’t really keen on the ‘industrial’ feel.

After several minutes perusing, much to Baby J’s amusement, I plumped for a 2 in 1 shampoo and conditioner – I don’t usually go for these but showers tend to be a grab-it-whilst-you-can thing at the moment, the quicker I can be the better! As well as that, I also bought a dry shampoo to try and rectify those frequent bad hair days! However I did also pick up some VO5 Hot Oil, which I have used before and loved. For more on my shop have a look at my Google Plus album.

I made an excuse to the hubs that night and hopped in the bath – a very rare luxury. Well, a hot oil treatment can’t exactly be tried out in the shower, now! Afterwards I gave it a blast with the hairdryer and I have to say it’s turned out pretty well. Nice and soft and feeling a lot more healthier. The 2-in-1 shampoo felt lovely when it went on and smelt yum!

So here are my best modelling efforts with my new do – whaddya reckon?

Here’s a before and after: 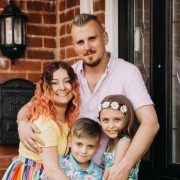 Lisa H
Message
Previous article
Fairies, Frolics and Family: Our Holiday in Derbyshire
Next article
Swimming With The Fishes: A Preview of Sea Life Centre Manchester