On Monday 28th May 2012 at 11.53am, our baby boy arrived in the world. At three days past his due date and weighing 7lb5oz, he was born via elective c-section. A beautiful blond screaming boy, he certainly made his presence known! Here is his birth story.

After a 40 hour labour with H, I had gone backwards and forwards for many a month about which delivery method I would opt for. An elective section would mean I would know what I was to expect and wouldn’t end up having another emergency section and the more difficult recovery that came with it. A VBAC would mean a much easier recovery and that I could be there for H almost straight away, however there was the risk that it would be unsuccessful. After speaking to the consultant it was decided they would let me go three days over but if he had not arrived by then I would have a section. In the end he made the decision for us and declined the option of arriving on his own. This turned out to be for the best.

On the Monday we awoke bright and early at 6am in order to get to the hospital for 8am. To say I was nervous would be putting it mildly. I hadn’t really let myself think about the coming surgery too much, but now the day had finally arrived it had become a little too real.

We arrived on the ward and were given a bed, and then told there would be an emergency section before us so we were to wait a bit longer. I had been warned of this beforehand so was prepared. Of course, it didn’t help with the nerves! Finally at 11am Mr H was told to change into his scrubs and we were taken to theatre. 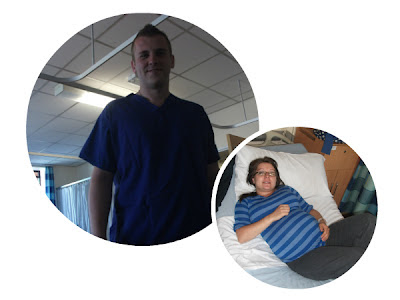 They sat me on the table and a kindly nurse tried to distract me as they prepared the room around me. I was told to sit perfectly still as they administered the spinal, which is harder than you think, then once it had been done they quickly laid me down ready for the section. To say I was nervous would be a huge understatement and they told me I was incredibly tense – after all they were slicing my tummy open, who wouldn’t be tense! At one stage I became short of breath so had to be given some oxygen – after passing out during H’s birth and missing it, I thought ‘here we go again’. However once I took some deep breaths I was fine and within a few minutes (although it seemed like hours) they announced he was about to be born. They told Mr H to stand up just as he came out and he actually saw baby boy arriving into the world. They then lifted him over the screen for me to see and I was completely in awe. It was so amazing for me to see one of my babies being born, I didn’t even cry I was so overwhelmed. He absolutely screamed his head off, which I had to check with Mr H if that was normal – how was I to know?!

After he was cleaned off he was brought back and Mr H held him as I was still laid on the bed, arms out at each side, whilst they stitched me back together. It was then they advised me that my uterus wall had torn downwards, away from my previous scar, as it hadn’t healed right from the first section. They told me that if I had tried naturally the chances are I would have ruptured, which would have put both the baby and myself at high risk. They also advised me not to have any more children and if I was to, I would have to have a section. It makes me think there was maybe someone watching out for me, somewhere.

After waiting in recovery, we then returned to the ward with our baby boy. After only a short deliberation we decided on our long-standing favourite name, Jack, along with the previously chosen middle names of Alan and James, after both our dads.

Forty eight hours after Baby J’s arrival, we were finally discharged from hospital and arrived home with our beautiful boy, ready to introduce our two babies and make our family complete.

Lisa H
Previous article
My Week That Was – Settling In
Next article
Pretty.Little.Things – Calming Comforters